As usual we start our work from pattern printing.

Please remember, the last sheet in the file is “the Guideline to combine the pattern sheets”, so it is a kind of a tip. 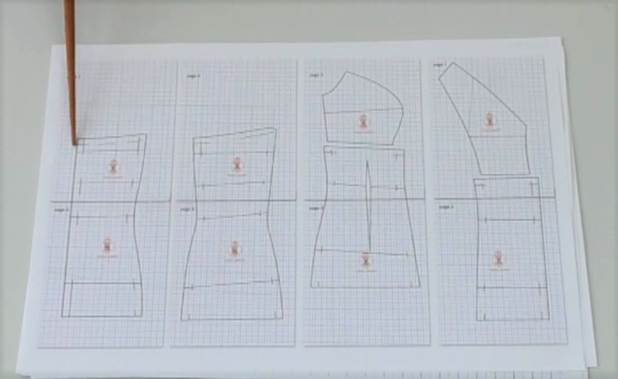 One more thing: the patterns should be printed in their actual size or 100%, that is the actual size on printer settings. Besides, there is no need to cut or trim the printed patterns: unprinted strips appear due to technical limitation of printers, so no need to pay attention when you combine the sheets. Also the pattern lines should be finished.

When you glue together all patterns according to the guideline, you should get 4 sheets of the patterns.

Besides the hip line marked on all patterns, there are the stomach line, waistline, under bust and bust lines.

There are no seam allowances on the cup patterns only! 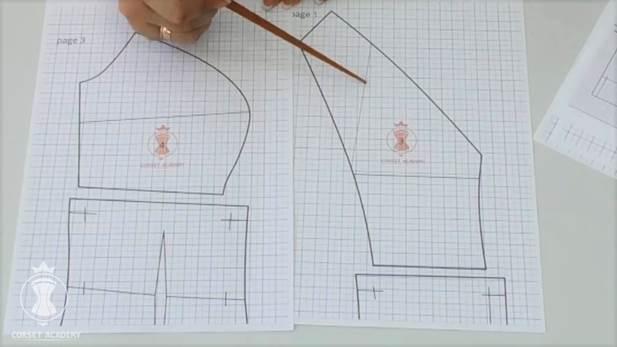 The peculiarity of this pattern is the central front pattern of the dress is not with a fold, but with a middle seam. On the central cup pattern you can see the rounding along its center, which is the dart necessary to form cleavage.

Please pay attention to the thin inclined line, which intersects the central cup pattern. This line shows the visual direction of curve. You might notice that the cup pattern is unusual and we will discuss it later. In short, this line shows the position of the Rigilene bone as if it is sewn along the cup curve as we usually do.

The bust line is marked on the cup patterns and both patterns are cut along the under bust line.

I want to remind once again that the cup patterns do not have seam allowances.

All the pattern pieces are glued together, so we can alter them after the measurements of your client.

We need to open the table “Automatic calculation of the dress pattern alternation”, attached to the book.

The measurements corresponding to the mockup of the pattern attached to this course are already entered into the column “Measurements of mockup”. If you use any other pattern or you notice discrepancy with the sizes of my pattern, use numbers you get. Thus, you can use this calculation table for such dress for any pattern.

Please also note that I am using new additional measurements: waist-front, stomach-front and hips-front. We need these measurements to ensure the side seam of the garment is exactly in place in the bust area, as well as it goes down vertically at the levels of the waist, stomach and hips. And, just as importantly, based on these additional measurements, the front curves of the dress will be calculated, starting from the waist and below. This is not so important in the corset making unlike in the dress making as for the dress we use the hip circumference measurement. And the redistribution of the back and front pieces at the hip level also determines the right fit and the balance of the dress.

Therefore, in order to understand where the side seam is on the hip line, additional measurements should be taken and used in the calculations: waist-front, stomach-front and hip-front. Moreover, these measurements are necessary not only for full-bodies clients. It is also advisable to take these measurements from slender clients to calculate allowances or some alterations in the front and back curves.

As soon as all initial numbers are entered, the program will immediately make all calculations for your pattern and all necessary alterations will be entered in the table, which I recommend to print out, so that you have all the alterations at hand. 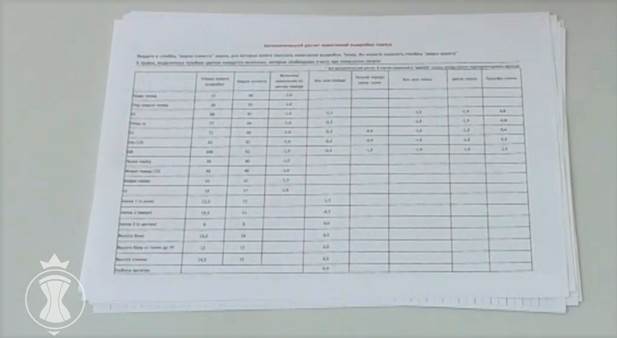 Then I made necessary changes in the initial or standard pattern i.e. I drew the new lines according to the table.

Then I start the analysis of my client’s pattern that was automatically calculated. (See the detailed analysis in Tutorial №3).

I did not like that there is a very large deepening in the back curve at the level of the under bust line. We have a very large deflection, which might not flatten during sewing the pieces together (red line).

Therefore, I decided to manually correct the pattern, namely, to redistribute this large alteration in the back curve in the under bust line by transferring part of this alteration to the side seam of the front and back (blue dashed line).

Although, it should be considered, that a large deflection in the side seam of the back and front along the under bust line is not recommended. A large deflection on the side of the garment under the bust can harmfully affect the fit of the dress.

For example, it might lead to the unwanted bubbling on the cup near an armpit and as a result to poor fit in this area.

Having considered all possible consequences, I reduced the alteration in the back curve by 0.5 cm and made a deflection by 0.5 cm in the side seam respectively.

Such a small deflection in the side seam in the under bust line is acceptable. 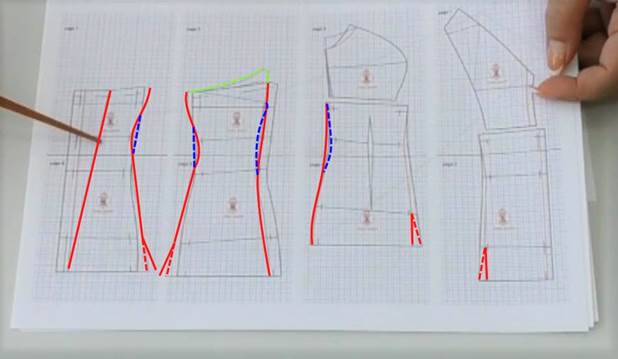 In order not to forget that the dress will not be joined in the back at the lacing line and the back is separated into a triangle, I marked the new lacing lines on the central back piece.

A feature of our dress is that the dress will be joined in the back only at the hip level and I do not have any zipper on the skirt.

As for the height of the side seam, despite the fact that the measurements of the standard pattern and the client’s pattern are practically the same, for the convenience of my further work with the dress, I drew the side seam line a little higher than on the pattern and smoothly reduced the back upper edge of the dress to the standard height (green dashed line).

At this stage when I altered the standard pattern after the measurements of the client I won’t be able to move forward without making a mockup as per altered pattern! Here is the explanation. I need to draw a beautiful cup shape, beautiful and smooth transition lines from the cup to the back, from the front to the back along the side seam as well as the back line and transition to the lacing.

Therefore, when I glued all patterns together, checked them once again, I would cut the pattern along the altered lines and cut it from the mockup fabric. Moreover, I need to cut the half of the dress only for the final corrections.

Then I will join the mockup along all curves, put it on the dress-form and complete the final construction.