Tutorial 11. Cutting the Ruffles and the Yoke.

I have made some adjustments in the cutting.

When cutting the soft tulle, I realized it was way too soft and the calculated number of strips would not create the desired fullness. I had to cut some additional strips.

I cut two additional strips, i.e. a total of four.

I cut two additional strips, i.e. a total of five.

I left the number of strips unchanged (four). The two hard mesh ruffles already sewn on along the hem of the petticoat will produce enough fullness.

As you can see, the soft tulle consumption has changed:

I adjust the calculated values on the writing board. 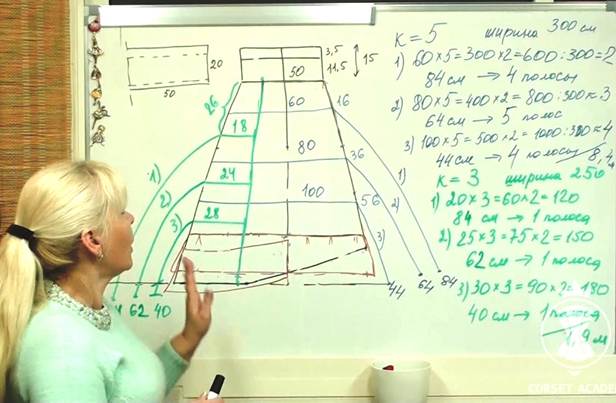 I have in stock some hard mesh fabric with a width of 250cm and not 180cm. It is also softer than the mesh fabric used for the bottom ruffles. As the result, the number of the strips has stayed the same but their length has changed. The increased length will allow me to gather the ruffles more thickly thereby compensating for their softer texture. The hard mesh fabric consumption stays the same.

Now I only need to cut the yoke of the petticoat.

The finished yoke is supposed to have a half circumference of 50cm and a width of 15cm, 3.5cm of which falls upon a tunnel at the top for inserting an elastic band.

Sewing the yoke involves cutting a piece of knit fabric. The piece is supposed to have a length of 50cm when folded in half (I included seam allowances along the vertical edges when applying adjustments).

Let us look at the ruffles.

I have cut my soft and hard tulle in accordance with the calculations.

All strips of the same width need to be joined in a single very long strip. It is best to keep all seam allowance on the same side.

After sewing all tulle strips together, I make a row of stitches along one edge and gather the fabric on the thread. Of course, it is not exactly easy to gather a several meters long strip down to a relatively short ruffle.

But I will have a great tip for you. After making a row of stitches along one edge of the strip, I fold it in half, secure the fold line, and start carefully gathering it while alternating between the two halves.  I gather each half down to half the initial length.

For better clarity, let me illustrate with pictures the gathering of a ruffle with a width of 84cm.

Initial length of the strip:

This strip should be gathered down to 120cm.

I fold it in half, secure the fold line on the dress-form, and walk six meters away from it pulling both ends of the strip to me. 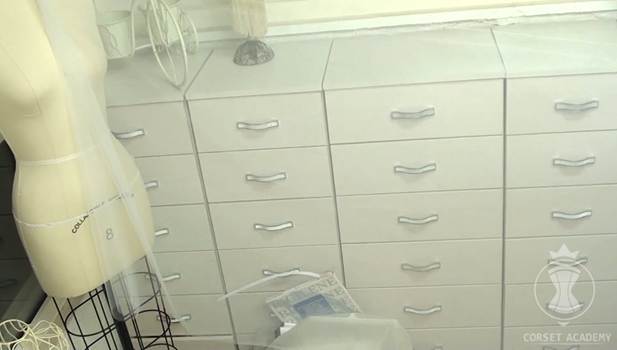 I alternate between the two ends gathering one after the other and gradually approaching the dress-form. Each half needs to be gathered down to 60cm. 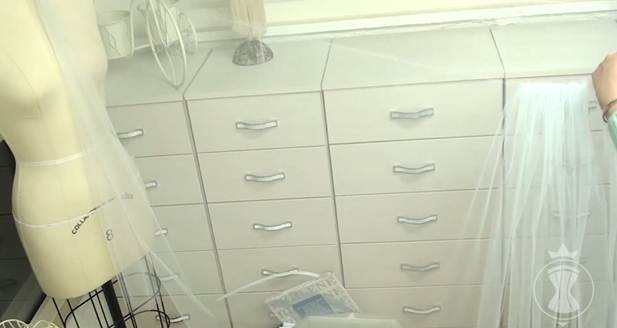 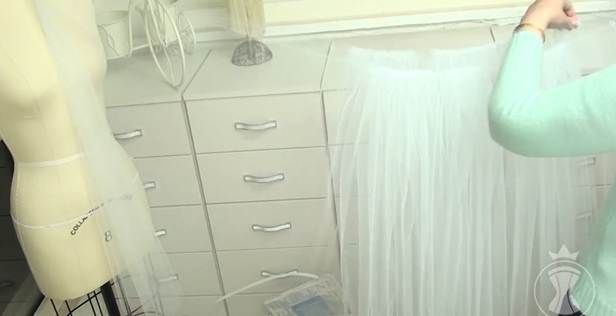 It is a great method: it allows you to gather fabric quite fast and yet very evenly and neatly. 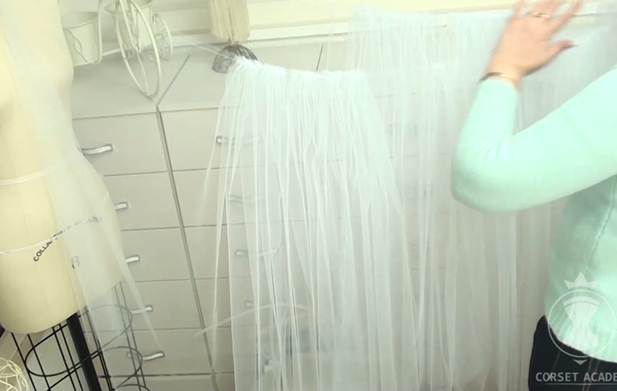 The hard mesh strips are gathered with the help of a ruffler presser foot.

I sew the ready ruffles to the petticoat. By this time, I have already sewn on the bottom ruffles and finished the hoop tunnels with bias tape from both sides. 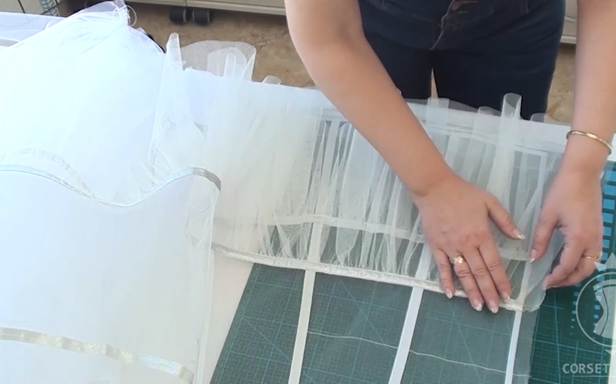 The guidelines for sewing on the hard mesh ruffles are marked by stitches. I sew them on one by one starting from the bottom.

I sew on the first bottom ruffle leaving 2cm seam allowance in the central back seam area. I will join the ends after sewing the central seam.